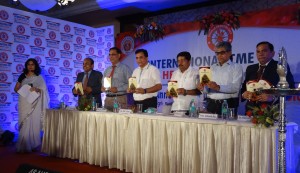 Indian Patient Society for Primary Immunodeficiencies (IPSPI) has been moving forward with PID awareness with local health authorities in the past few months. India has a federal structure but health is a state subject making lobbying for access to treatment a state based work. IPSPI has been having several meetings with central and state authorities to ty to improve the access to care for PID patients.
There are 3 plasma fractionators in India and 2 of them have recently started manufacturing IVIG but the Government still has to work out the policy to make the supply of these therapies available to patients. Meanwhile many patients are left without access to replacement therapy because they simply cannot afford it out of pocket.

Indian Government awareness
IPSPI met with Sh. Bhanu Pratap Sharma, Secretary, Health and Family Welfare of the Government of India at Nirman Bhawan, New Delhi on 8th September following a previous meeting held in 2014 also in Nirman Bhawan and chaired by Dr Jagdish Prasad, Director General of Health Services. In 2014 it was stated that the Director General of National Aids Control Organization (NACO) would consult with local physicians and propose a regulation by which immunoglobulins would be made available through the plasma fractionators rather than through the Governmental Institutions. It was then also stated that Immunoglobulins (IG) would be provided to Central Government for use of in Primary Immunodeficiency patients.
In the recent follow up meeting Sh. Bhanu Pratap Sharma expressed his cooperation on this issue. He further stated that the delay was caused by the lack of regulation and requested IPSPI to provide their input.
IPSPI also met with Shobini Rajan, Additional Director General of NACO, who confirmed that NACO had worked out the regulation which will change the way plasma products are supplied, from the Government Institutions to the plasma fractionators in India.

State of Odisha campaign
The Indian patient group has had several meeting with the Health and Family Welfare cabinet of the state of Odisha lobbying for the inclusion of IVIG in the Essential Medicines List of the state similarly to what happens with Factor VIII and IX used for Hemophilia patients and provided for free by Government Institutions. The Directorate of Health Services of the state has also sent a letter enforcing the need for IVIG to be included in the list.

Rubby Chawla, Founder and President of IPSPI was a speaker in the Indo-US Conference which focused on ‘Realizing the Potential of Rare Disorders in India’ organised from 7th-9th September 2015 in New Delhi. She presented about the PIDs in a session focused on Linking Patients to Research Programs, Treatment Centers and Patient Advocacy Groups.

For more information on Primary Immunodeficiencies in India visit www.ipspiindia.org or email rubbychawla@ipspiindia.org