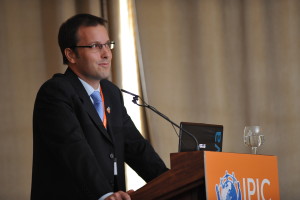 IPOPI participated in the recently held Annual General Meeting (AGM) of Health First Europe (HFE) in Brussels. The 2014 activities of Health First Europe were reviewed during the meeting and the work plan for 2015 was discussed. Among the topics on the agenda of HFE in 2015 are: innovation in health and social care, community care, patient safety and health literacy: facilitating prevention through early diagnosis. The Board elections were also held. Johan Prevot, IPOPI’s Executive Director, who has been a member of HFE since 2014 was elected on the Board. John Bowis was re-elected as Honorary President. Albert van der Zeijden from the International Alliance of Patient Organisations (IAPO) and Bert van Caelenberg (EUROFEDOP) were re-elected Vice Presidents.

Health First Europe is an alliance of patients, healthcare workers, academics and healthcare experts and industry. HFE’s mission is to ensure that equitable access to modern, innovative and reliable medical technology and healthcare is regarded as a vital investment in the future of Europe. HFE and IPOPI share many common objectives including on patient-centeredness, patient involvement in HTAs, early diagnosis and prevention. IPOPI looks forward to a new chapter in the collaboration with HFE at the European level.