IPOPI is celebrating its 25th Anniversary and we are pleased to celebrate this major primary immunodeficiencies family milestone with the launch of a new website!

IPOPI is grateful to many people and many organisations who have been part of IPOPI’s success story. In particular, we would like to thank Bob LeBien, who had the vision and global thinking to create IPOPI which represents this fantastic community that is the extended primary immunodeficiencies family.
Since its inception, IPOPI has grown tremendously. Eight years ago, IPOPI had 30 national member organisations, nowadays we represent 61 patient groups from across the world and the family keeps growing.
A lot has been accomplished but there is still a lot be done, not only for the patients but with their involvement. IPOPI is extremely busy in all regions of the world, greatly contributing to increasing awareness of primary immunodeficiencies globally. With a new Board of Directors and a larger staff IPOPI is more than ever committed to building an improved global framework of care for our patients’ community. 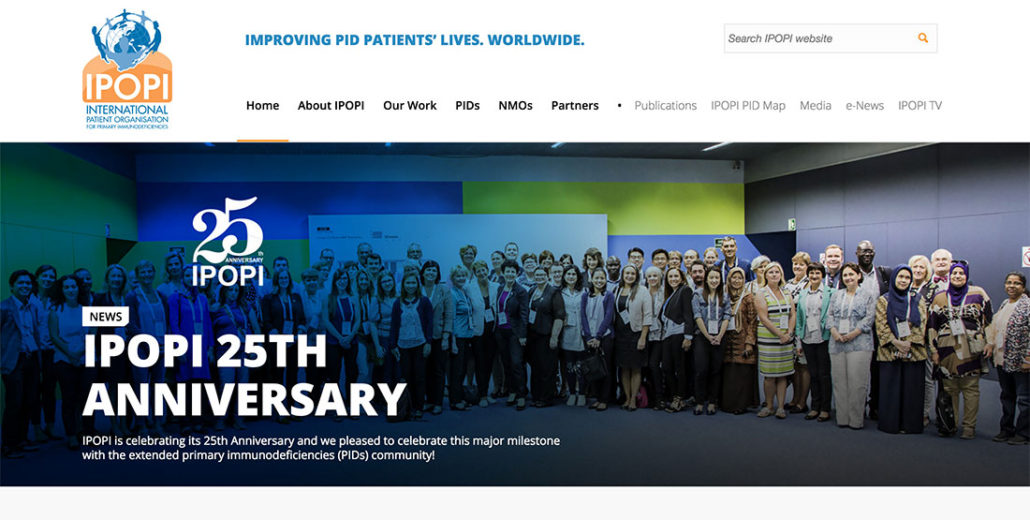 To celebrate IPOPI’s 25th Anniversary a new IPOPI.org website is being launched. The new website boasts a responsive design, is easy to navigate on mobile devices and user friendly. It includes all IPOPI news, publications (leaflets, ebooks, recommendations, papers, etc), events, campaigns and, more importantly, the IPOPI PID Map. With this new feature, you can find information on PID diagnosis, treatment and patient support from all over the world.

2003 – Immunoglobulins are removed from the World Health Organization (WHO) List of Essential Medicines (EML).

2007 – IPOPI is accepted as a member of the WHO Global Collaboration on Blood Safety.

2010 – IPOPI expands its staff. Johan Prevot joins as Director of Development, succeeding to David Watters in the following year as Executive Director.

2012 – Asian development plan is created thank to a generous grant from one of IPOPI’s founders, Bob LeBien.

IPIC2017 in Dubai
IPOPI XV Biennial Meeting in Lisbon in 2018
Several PID awareness and advocacy campaigns in various regions of the world.