France – Paris-London in 24 hours by bike: would you beat this challenge?

Matteo Pellegrinuzzi, vice-president of IRIS, the French national association for primary immunodeficiencies, came up with this crazy project combining sports and solidarity. An enthusiastic cyclist since childhood and affected by a PID, Matteo wanted to link these two aspects of his life in one challenge: to get from Paris to London in 24 hours by bike.

More than connecting the two cities, he wanted to link the two hospitals where children receive treatment for their PID: Necker-Enfants Malades Hospital in Paris and Great Ormond Street Hospital (GOSH) in London. This was also a symbolic challenge as some French children, who have an ADA SCID, need to travel to GOSH where gene therapy is available. “Treatment should travel, not patients” was the main message of challenge, raising awareness   to the difficulties PID patients face to access treatment.

After a year of preparation and training, Matteo left Necker’s hospital on July 6 at 1a.m, together with two IRIS’ champions, David and Vincent. t. IRIS’ volunteers accompanied the cyclists for support. They reached Dieppe at 7 a.m., right on time to catch the ferry, where they   hadsome rest. After docking in Newhaven, at 3 p.m., they got back on the saddle, and did not forget to cycle on the left side of the road! They reached GOSH at 8 p.m. where some members of PIDUK, the UK PID patient group, were awaiting to celebrate their arrival.

From this one-day trip, we hold dear the investments of everyone involved, at the background or at the forefront, for the PID cause. They all showed that having a PID doesn’t prevent one from having dreams and  realising them, nor to answer to challenges. Even with a PID, almost anything is possible and , for sure, solidarity is stronger than disease. 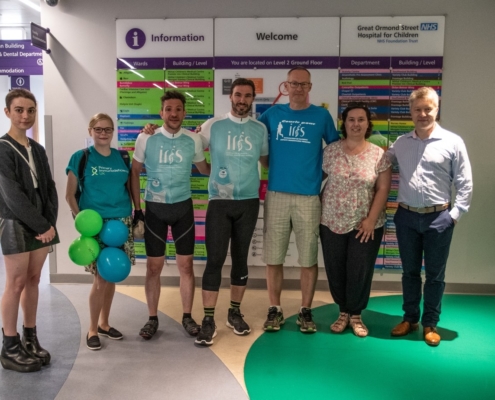