The beautiful island Corsica (322,120 inhabitants) is one of the French regions where PID is less diagnosed than anywhere else in France.  One of the main reasons to explain this situation, is the lack of information on PIDs in the Corsican hospitals.  Patients have no other choice but to be seen by doctors on the main land for their treatment.

Valérie Igounenc, IRIS’ regional Representative in Corsica has pushed the doors and met many doctors in the past months: “My commitment is due to my mother’s late diagnosis of CVID in 2003. I was diagnosed immediately afterwards as I was presenting repeated infections. When my mother passed away I decided to join IRIS and later became the Regional Delegate to raise awareness of the issues linked to PIDs amongst the Corsican doctors’”.

Valérie succeeded in convincing them of the necessity to organise and “information day” in Bastia. The meeting objective was clearly to improve the access to diagnosis and treatment in this region and it took place on March 30th, the best date suitable to ensure greatest attendance. IRIS opened the meeting (representing the community of PID patients) and Prof Claire Fieschi (Immunologyst in St Louis hospital in Paris) conducted the lectures.

Several physicians and medical staff were invited amongst which the Corsican Otolaryngologists, pneumologists, pediatricians, pharmacists, gastro-enterologists, haematologists, both from public and private practice as well as the social workers from Bastia Hospital.

The meeting went really and IRIS kept in touch with all doctors, sending them the presentations of that day and the latest information available on PID (Univers DIP, medical publication released during the WPIW).

IRIS’ vision has always been to work constructive and fruitful side by side with the doctors which this meeting further helped to achieve. 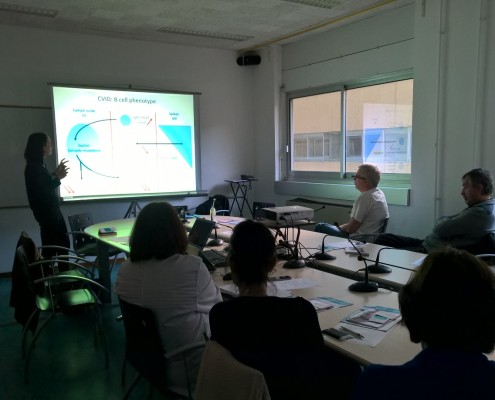