ERNs in Action Meeting in Brussels

IPOPI has been active in the European Reference Network on immunodeficiency, autoinflammatory and autoimmune diseases – ERN-RITA – since its launch and Mr Johan Prevot, IPOPI’s Executive Director, was pleased to represent primary immunodeficiencies (PID) patients at the ERNs conference held in Brussels on November 21-22. This was the fourth ERNs conference where health professionals, researchers, patient representatives and policymakers were brought together to discuss the future of ERNs. The meeting looked into the need to consolidate the networks and examine the challenges lying ahead.

One of the priorities for 2019 will be to ensure ERNs become integrated into national health systems. There was an interesting discussion around the need to expand the networks geographically to be more inclusive of countries who do not yet have specialist centres in the ERNs. It was noted that high gross domestic product (GDP) member states were better represented in the ERNs than lower GDP member states. An interesting point was made about what can be realistically achieved in terms of geographical expansion with the current limited resources and if we should ensure that all EU patients can have access to the ERNs by focusing on the ability of the networks to provide cross-border expertise and care.  The importance of registries was also underlined during the conference and it was mentioned that a second call will be launched in due course to provide further support to registries. The potential of ERNs in developing clinical guidelines for rare diseases was also discussed as was the value of the Clinical Patient Management System.

Lastly, the long-term sustainability of the ERNs was discussed extensively. Challenges mentioned during the conference included funding, awareness among patients and health professionals, support from hospital managers, and the limited human resources available to work on ERN-related initiatives. The need to develop an interest and expertise in rare diseases among younger health professionals was also highlighted, a point IPOPI strongly supports for primary immunodeficiencies as well.

Commissioner for Health and Food Safety Vytenis Andriukaitis stated in his speech: “Expertise is being shared, developed, and expanded across Europe – increasing the capacity of specialists and health care and cure systems. We have to believe in our success and continue to work in our cooperative spirit.”

ERNs certainly have the potential to further demonstrate the huge added value of the EU in the field of rare diseases.
One challenge that perhaps did not feature so high on the agenda was the impact of Brexit on the ERNs, knowing several ERNs were UK-led, including ERN-RITA, and collaboration on rare diseases between EU member states and the UK has always been mutually beneficial. Following the impact of Brexit, ERN-RITA has recently had to restructure its management and a voting process was organised at the end of October. Utrecht Medical Centre was voted as the centre to take the lead after Newcastle meaning that Prof Nico Wulffraat, who has been a member of the Board of ERN-RITA will succeed to Prof Andrew Cant as Coordinator of ERN-RITA as of March 2019. 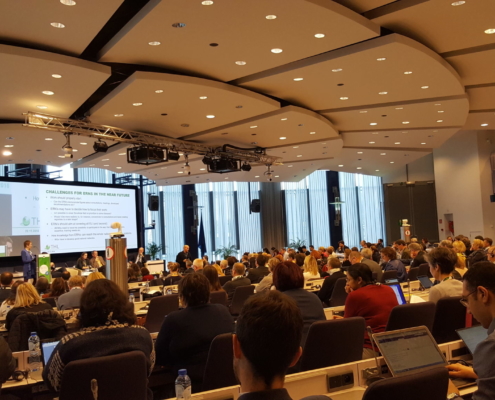