The Belgian Organisation for Patients with Primary Immunodeficiencies (BOPPI) organised many exciting activities that culminated with BOPPI’s 3rd National Family Day for PID Patients and their families. It was held on 25 April in PASS, a scientific adventure and amusement park near Mons.

Around 160 PID patients and their families attended and were able to get to know each other during the lunch. The event continued with two well-attended medical workshops for parents and adult patients, chaired by PID specialists’ physicians. The topic of the first workshop was ‘How to live with a shortage in anti-bodies?’ and addressed a number of practical issues related to every day life with a PID. The second workshop was dedicated to the question ‘Where does my PID come from?’ and focused on the genetics of PID and the possibilities offered by gene therapy.

In parallel, children and teenagers took part in fun activities ranging from exploring scientific discoveries, making a film, preparing a circus performance or training to become a magician!

After the workshops, parents and children had some free time to visit the park and the day ended with a festive drink and a HUGE BUBBLE BLOWING event.

The full BOPPI team had worked hard to prepare for this day and the happy reactions we got are a great reward. We made new contacts and new friends that will further strengthen our group.

During this year’s World Primary Immunodeficiencies Week (WPIW), a number of BOPPI members organised various ‘Balloon & Bubble’ events in support of the JMF ‘Burst the Bubble around PI’ campaign. Balloons were launched and bubbles were blown in schools, hospitals, playgrounds and people’s backyards! During the Week our Facebook page received many happy pictures of children blowing bubbles and brightening the year’s campaign.

Workshop on How to live with a shortage in anti-bodies.

Blowing bubbles at the end of the Family Day. 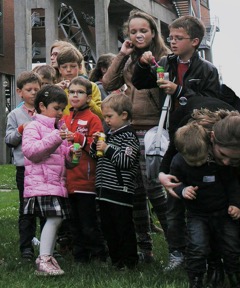 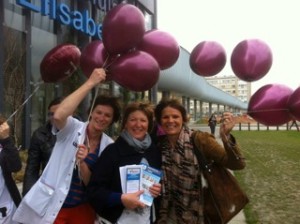