The Association for Primary Immunodeficiencies (AAPIDP) joined the Argentinian Federation of Rare Diseases, (FADEPOF) to celebrate Rare Diseases Day 2017 on the 28th February. The two organisations as well as other patient representatives got together at the Parliament house square where a rare disease patient had the opportunity to symbolically take part in the lowering of the country flag ceremony.

Participants at the event  attended on behalf of 3.2 million Argentineans with rare diseases and asked for the implementation of the National Program of Rare Diseases which, despite having been approved,  still has not been implemented. A social media campaign using the hashtag #ExistimosEPOFArgentina (#WeExistRDArgentina) helped boosting the outreach of the campaign. 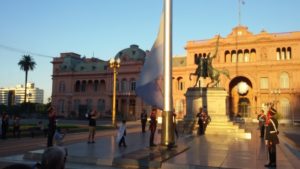 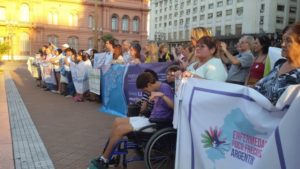 In observance of Rare Diseases Day 2017, the Buenos Aires City illuminated some of the city monuments in purple, the same colour used by the Rare Diseases Federation FADEPOF.

The RD events also got the attention of the media with several articles being published in the press and dedicated features on TV and radio programmes, such as in Telefe. 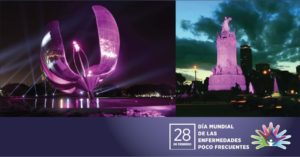