ERN RITA held its second Council meeting in Amsterdam, last November. Attendees had the opportunity to review the project and to prepare RITA’s second year of existence. Martine Pergent, Vice-Chair of the IPOPI Board and Chair of the RITA Communications Working Party, was in attendance.

European Reference Network RITA brings together the leading European centres with expertise in diagnosis and treatment of rare immunological disorders. The network divides these conditions into three sub-themes: primary immunodeficiency (PID), autoimmune disorders and autoinflammatory disorders. In addition, there is a sub-theme of paediatric rheumatology which straddles the autoimmune and autoinflammatory sub-themes.

After an introduction, ERN-RITA Coordinator, Prof Andrew Cant, invited each of the 13 Working Groups’ Chairs to present a short report on achievements and projects.

The next steps for each Working Group will be to define their action plan for the second year of ERN RITA’s existence thus  contributing to the content of the ERN’s second year annual work plan of the framework partnership agreements by the end of 2017 (FPA – March 2018-February 2019).

With regards to the future, there was a discussion on the way RITA should increase the number of Health Care Providers (HCPS). RITA has 24 HCPS over 10 member states and would be keen to enlarge its representation among more countries in the European Community, as the possibility to add new HCPS will be given, up to March 2018.

Participants at the 2nd ERN-RITA Council Meeting in Amsterdam 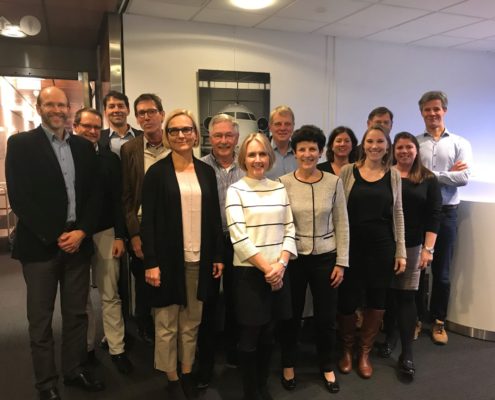 The CPMS is a secure Software that enables health professionals to enroll patients using comprehensive data models. It aims to support ERNs in improving the diagnosis rates and access to treatment for patients living with rare or low prevalence complex diseases across national borders of EU Member States. Health professionals can use the CPMS to collaborate actively and share patient perspectives within and across ERNs.

The CPMS is supported by Virtual Communication Tools to facilitate the interaction between clinicians. Reporting tools are among the functionality of the system to seamlessly empower users to generate reports of interest for administrative and clinical purposes.

RITA will identify experts in its particular fields of interest who would serve as panel members for virtual consultations on difficult patient cases. Each HCP was required to provide at least one (or more) contacts of experts who agree to participate in this service.